PMWeb has extensive features that allow data to be secured and accessed easily. These features include:

Document Manager - PMWeb’s optional Document Manager provides additional features for organising and searching records. Document Manager provides ready access to and management of all records within the database. Every document uploaded can have extensive data added to its record, including metadata, notes, attachments and other related items. Users can subscribe to any folder and receive automatic updates should the documents in any folder be changed. PMWeb provides a familiar windows explorer-like directory to store, upload and download any file type. Check in/out with built-in viewer. Folders are tied to Security to control access for internal as well as external users.

Custom Form Builder - PMWeb’s optional Custom Form Builder allows Users to easily create their own data entry screens that are fully integrated into the PMWeb system and can be used with Workflow. They can also be tailored to the look and feel of existing Client Forms. Design data entry screens, validate fields from existing tables, build unlimited fields, specify if an entry is mandatory, create custom fields and custom tables, include calculation fields

Clause Library - PMWeb clause library feature allows the creation of extensive libraries of clauses and the assembly of those clauses into consolidated documents within standardised templates. This feature can be used to create final documents that can then be output in Word or PDF format. The feature is used to create contracts that form part of Tenders, which can then be output at a click in conjunction with other Tender documents to provide an engrossed contract for execution; create specifications for procurement and project delivery; and create leases or other documents involving the assembly of clauses.

Checklists - create default checklists to automatically add certain features. For example, if there is a “Project Checklist” or a “Contract Checklist”, you can have all those items automatically added to the Asset, Project or Contract process. You can also track when items are completed and by whom.

Notes and Attachments - Tabs to all main record, allowing the creation of notes, upload of documents directly, links throughout PMWeb (including to PMWeb Document Manager) and links to any external URL

Additional Info Tab - The Additional Info Tab allows the User-configuration (assuming the User has been given permission) of additional Tabs and records attaching, for example, to a Program, Project or Contract record. Once this data is captured within the PMWeb database, any number of Reports can be run against that data and relevant content can be included on Dashboards

Lists - PMWeb is a fully integrated solution that is designed around single-point data entry. Centralised records and configurable Lists allow single point record entry that also allows the relevant record to be accessed via fields in Custom Forms. New items can be created via a simple right-click action

Extensibility - PMWeb's other extensibility features include Language Manager - a tool that allows the label for any fiield throughout PMWeb to be changed to suit local terminology or re-task use of an existing field; and User Defined Fields (UDF) that can be added to existing grids. 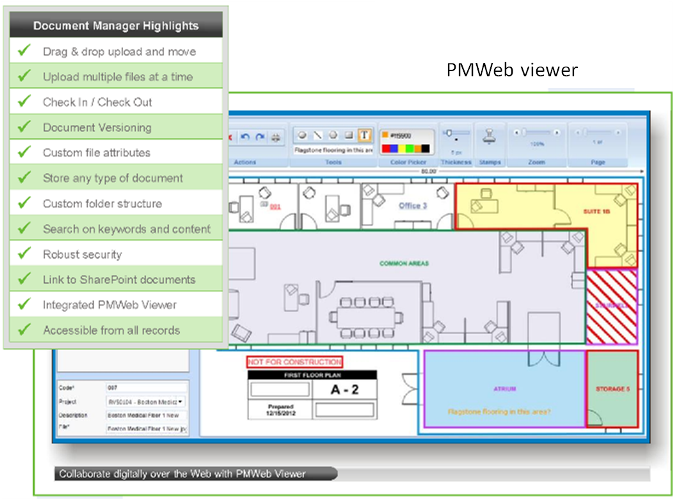